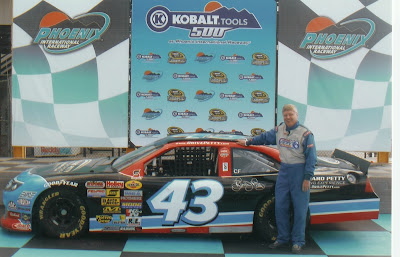 UPDATE: I'll be on SiriusXM 94/208 in the early hours Sunday a.m. right after the Grand Prix of Japan with Rick Benjamin on The Checkered Flag post-race show.


It was "Boys, have at it" last Friday at Phoenix International Raceway.

Arizona Republic Sports Editor Mark Faller, Page 2 columnist Bob Young and Chris van der Beeck, who coordinates the racing coverage, and I were out at PIR to drive Richard Petty Driving Experience stock cars on the newly repaved and reconfigured oval. Bob really got with the driving program and here's a link to his Sunday column.
http://www.azcentral.com/sports/heatindex/articles/2011/10/01/20111001phoenix-international-raceway-new-surface.html

We all had our pictures taken with a famous No. 43 in victory lane before getting out on the track. I'll skip the details here, but will say the Petty Experience crew was extremely professional and helpful, and I'd certainly recommend you give it a go if the opportunity ever is there. I drove a No. 9 Dodge Charger for eight laps.

I asked to go last because my objective was different from the typical student -- for reasons I'll explain here next week. I've had the chance to drive a Corvette at the Bob Bondurant school and even a Formula Ford on the Pocono road course (in the wet!). I've never had any thoughts of being a driver, especially after my misadventure in a media snowmobile race many years ago. I got to bumping on some ruts, ran into the guy ahead of me, and flipped. I landed on my shoulder and had my arm in a sling for one week!

Instead of having to narrow-focus on my line and driving and speed, I wanted to broaden my perspective to observe and experience the PIR changes. Especially the slight banking, increased radius, and especially the dogleg. That's now a real turn -- no more short-cutting. Again, I had a good reason for wanting to take this approach and if you read me here next week, you'll understand. Meanwhile, I wasn't fast and will admit I missed getting into third gear on my first try, but I didn't crash or spin or hit the wall and got my "graduation" certificate.

One other thing I came away with was this was a great example of relationship-building and can only be a positive for PIR coverage down the road. Others should take note.


You don't have to be a drag racing fan to maybe find my October "Drags, Dollars & Sense" column on CompetitionPlus.com interesting/useful. No, not all publicity is good publicity. Here's the link:
http://www.competitionplus.com/drag-racing/editorials/19210-drags-dollars-a-sense-not-all-ink-is-good-ink


FAST LINES: Katie Kenseth's injuries last week while practicing for a charity race just reinforces what I've said for some time -- these sorts of events are a bad idea. I notice those old-timer events have abruptly stopped in the aftermath of Larry Pearson's injuries at Bristol the other year . . . Sorry, NASCAR's new Integrated Marketing Communications department, but this was just too much: The 2012 schedule was released month-by-month, at five-minute intervals, on Twitter. News is news, not a game . . . This is how PR people lose credibility: The post-Kentucky news release from HVM Racing didn't mention that Simona de Silvestro spun in the pits and hit a member of E.J. Viso's crew. What? Did this PR-she think no one noticed? . . . NASCAR's two-day Cup test at PIR is Tuesday and Wednesday. Mark Armijo will have a story in the Republic Wednesday, and I'll be in the paper Thursday and Friday and also will have an NHRA-at-Firebird story next Sunday. Please check us out at http://azcentral.com/ .