THE SAD STATE of PR

I needed to speak with the PR rep for a championship-contending team at a late-season major event. I didn't have this person's cell number and didn't make contact when I went over to the team's pit area. No problem, I figured, we'll connect in the media center.

The day passed. That evening, I sent an E-mail: "Need to see you tomorrow." This is the actual, for real, reply I received:

"Call my cell. I don’t visit the media center much."

A publicity person who doesn't come to where the journalists are located. (!)

Welcome to what passes for contemporary public and media relations.

This is my final blog of the year. I'm sorry to conclude on a negative note. But this is one of the most serious issues within the motorsports industry and, I hope, one that will draw careful consideration by series executives, team owners and sponsor managers in 2008.

I covered last month's Phoenix International Raceway NASCAR weekend for the Arizona Republic. The listed PR reps for the top 18 (18!) drivers in the Nextel Cup standings went the weekend without interaction with writers for the state's largest newspaper. The listed contact for the Busch Series champion didn't respond to requests for assistance for a special section story.

How is that acceptable to those who make the hires and sign the checks?

Would at least one of you, please, write me with the answer to that question?

I've made this serious suggestion to NASCAR: As a test, post a sign-in sheet for PR reps in some press room early next season. The evidence, as I know it, is not much paper or ink will be required. 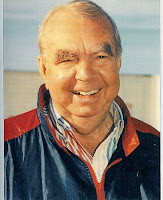 I encourage anyone interested in this subject to read my Dec. 12, 2006 posting. My great friend Jim Chapman (left, photo courtesy Dan R. Boyd) knew PR was ALL about working to develop one-on-one relationships with the media. Read about it in Jim's own words, as he shared his insights about the once-proud PR profession.

Jack Duffy, who as Hurst' PR VP was Linda Vaughn's boss, was an early influence on my career. Jack, who died earlier this year, used to personally invite me and other journalists to Hurst receptions. He'd say, "Please come." When we'd arrive, Jack would shake hands and say, "Thanks for coming." When we'd leave, Jack would again shake hands and say, "Thank you for stopping by. I appreciate it."

Whatever happened to that personal touch? To common courtesy? To professionalism?

The executive management of EVERY sanctioning organization should be concerned. No matter how large their own staff, or sizeable their budget, the individual team/sponsor reps will ALWAYS be the front-line soldiers for all series. Those who say, "There's nothing we can do," well, the NFL requires its teams to follow certain standards . . . why is it motorsports can't do the same?

While you're at it, please mandate some Journalism 101 courses. There's no excuse -- none -- for the "we're excited about/looking forward to" non-news "news" releases. A recent example: The open-wheel team whose announcement revealed the organization "is both flattered and excited to have" two new drivers.

Here's how that was handled on my keyboard: Ctrl/Alt/Delete.

How sad this person doesn't understand press releases are written for the PRESS, not for ego stroking of the owner. And, even more sadly, she's not alone.

A news release last week informed us that Hermie Sadler is now a professional wrestling broadcaster. TNA Wrestling, on Spike TV, "delivers a distinct brand of high-risk, athletic entertainment." At least, that's what they want us to believe.

Sadler, who retired as a NASCAR driver in 2006, is a SPEED analyst. Even so, I guess Hermie forgot about the Tony Stewart-yellow flag controversy of some months ago, in which Stewart questioned the validity of debris cautions. That brought the very legitimacy of NASCAR into question and drew comparisons to -- yes -- pro wrestling. Sadler allowed himself to be quoted thusly:

“Commentating for professional wrestling is, in a lot of ways, quite similar to commentating on NASCAR.”

Great, Hermie, thank you. That's just what NASCAR needed. I, for one, will consider whatever you say about NASCAR in the future in that context.

Here's some free PR advice: Use an overnight service to send your letter of apology to Brian France. Copy Mike Helton and Jim Hunter. And, what say you, SPEED management? I'll say this again: That network needs to follow ESPN's example and retain an independent viewer ombudsman.
********************************************************************
Thank you to those who have contacted me about my Arizona Republic work. The feedback I've received from editors, readers, and those within the industry is we've made a least a little progress toward the goal of re-energizing enthusiasm for motorsports coverage in this state. The current plan is I will write Friday notebooks for Dec. 14 and 21, pause for two weeks, and then resume. There's a link in the right-hand column for the Republic's website, AzCentral.com. Here are links to two stories from last week:
http://www.azcentral.com/sports/speed/articles/1206racingnb1207.html

So, let's end with some happy news, regarding my friends Bob Margolis and Bob Carlson. It was tremendous for me to speak with Margolis, of Yahoo Sports, last week. He sounded strong and positive after his latest and difficult cancer treatments. Bob's outlook going into the New Year is much improved and he's hoping to cover Daytona. Carlson, the longtime Porsche PR pro, was able to return to his Atlanta-area home last week after cancer surgery and serious post-surgical complications. God Bless.

I'll guest next Monday (Dec. 10) on Racing Roundup Arizona to review the 2007 season and look ahead to 2008 with host Jamie Reynolds. Now in its 11th consecutive year, RRA airs from 7-9 p.m. on KXAM (1310). You can listen using the link in the right-hand column. The show is broadcast "live" from Max's in Glendale.


Helio Castroneves won Dancing With the Stars and Jimmie Johnson was officially crowned Nextel Cup champion last week and the question now is:

What does it really mean, going forward? 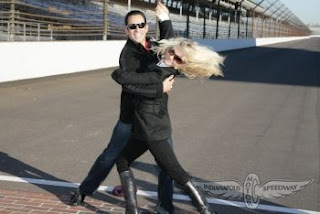 Depending on your point-of-view, it was either amusing or frustrating that ABC -- NASCAR's multi-billion dollar TV partner -- flew double Indy 500 winner Castroneves (left, with dance partner Julianne Hough, photo courtesy IMS/Ron McQueeney) to New York to make the media rounds . . . right in the midst of NASCAR's annual "Champions Week" activities. As far as I know, Helio didn't cost Johnson any Big Apple interviews. I suspect, though, that stock car's PR executives would have preferred the most famous open-wheel driver not to defect to NASCAR not to have taken a bite from their media feast.

Which ended, by the way, in reverse gear -- on third-tier ESPN Classic. The Cup awards aired on the main net during ESPN's previous NASCAR tenure. (Thanks to ESPN's Andy Hall, I watched the show "live" on ESPN360.com -- quite an amazing technological marvel.)

Those I know, who have a direct involvement, quietly admit some of the energy and excitement has gone out of NASCAR's New York adventure. And, of course, no less than Bruton Smith himself has suggested the ceremony be moved to Las Vegas. Conveniently, the site of the Smith-owned Motor Speedway.

From an entertainment standpoint, Bruton has a point, especially since a strike kept Broadway dark until the night before the Waldorf festivities. (Speaking of "entertainment," David Spade was a dud, like Jay Mohr before him. Spade told "jokes" that played into the stereotype of New York City -- an area in which ISC would like to build a track -- and about flying coach to a crowd who either own their own jets or use charters. Hint to Spade: Rule No. 1 is to know your audience!)

But that's NOT the point here.

For business, media and political purposes, NASCAR has every reason to keep haulin' back to NYC. It's simple: It's the easiest way to gain access to ad and marketing and PR agencies, participate in industry conferences, and get in front of media decision-makers. And keep whatever chances of a New York-region track alive. If Brian France eventually does decide to move, I'll take it as a clear signal all realistic hopes of a speedway there in the near future are gone.

As for IndyCar, the series did work to promote Castroneves' DWTS success. It was worth doing, as are the stated intentions to continue on that course. It sure can't hurt, especially considering known names/ticket sellers Sam Hornish Jr. and Dario Franchitti have split, replaced by Ryan Briscoe and Hideki Mutoh. Ouch!

I'd be fascinated to know how many gross media impressions Castroneves' DWTS title run generated compared with the combined numbers from his two Indy triumphs. Something tells me that data won't be forthcoming. The problem, however, is the next ICS race doesn't happen until March 29. In our contemporary society, where attention spans aren't much longer than a Sweet 'n Low packet, we'll cycle through dozens of "celebrities" before the green flag waves at Homestead.

Four months from now, will most people remember who won Stars? Probably more than who will know the winner of Survivor, but no where near as many who will be able to rattle off the contestants on American Idol. As Robert Bianco, USA Today's TV critic, wrote about DWTS: "Watch and root if you must, but if by some chance your favorite doesn't win, please take it well. You know in the grand -- or even the tiny -- scheme of things, it really doesn't much matter."

Here's a link to my story in last Friday's Arizona Republic. It focuses on Rick Hendrick and his championship management style:
http://www.azcentral.com/sports/speed/articles/1129racingnb1130.html

NASCAR reporters think they have it tough with some drivers or at tracks with inadequate work space. Read what it's like out on the campaign trail with Hillary Clinton:
http://www.washingtonpost.com/wp-dyn/content/article/2007/11/29/AR2007112902165_pf.html