ANOTHER THRILL RIDE at PIR 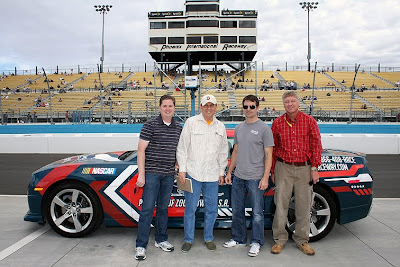 
I promised last week that this week I'd explain why I wasn't trying to be fast when I drove a Richard Petty Driving Experience stock car at Phoenix International Raceway on Sept. 30. As I indicated, I had a reason to want to take-in a wider perspective of the repaved and reconfigured track instead of trying to focus-in on speed.

That was because I knew, before the start of the two-day Sprint Cup test at PIR last Tuesday, Jeff Gordon would be taking us for a ride.

For example, as we went down the back straight for the first time, I asked Jeff to look left and note that SAFER barrier is positioned all the way down the inside wall -- something I had noticed when I drove the Petty car.

As I did when Trevor Bayne took us for a thrill ride before last February's Cup race at PIR, I videotaped the Jeff ride from the backseat of a Camaro using my BlackBerry. Due to space limitations in the Arizona Republic -- including the surprising Arizona Diamondbacks in the National League playoffs -- I have to wait until race week of the Nov. 13 Kobalt Tools 500k to write about Jeff's Lap of the New PIR. Sorry, but to protect that story, I'll have to delay posting the video. I do plan to put it on YouTube race week and will let you know here when it's available.

Meanwhile, here are some links to my recent AZR stories:


FAST LINES: PIR's communications director, Paul Corliss, will leave right after the Nov. 13 Cup race to join the national basketball retired players' association. He'll be based for a few months in New York, then relocate to Chicago. Paul has been a tremendous help to me in covering the PIR races since 2007 for the Arizona Republic. No replacement yet . . . Isn't it interesting how it only took Speed Channel a couple of weeks to figure-out a format for Ray Evernham to shine but ESPN couldn't do that over several years?


Mark Armijo and I will be covering this weekend's NHRA Arizona Nationals at Firebird International Raceway. Please check out our stories in the Arizona Republic or at http://AzCentral.com . I'll have an event preview Tuesday and notebooks Friday-through-Monday. Look for my Q&A with legends Don Garlits and Shirley Muldowney on Sunday, Oct. 16.