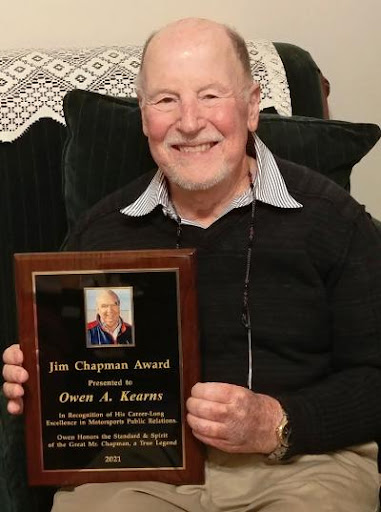 Owen A. Kearns, a Hall of Fame publicist, administrator, journalist and respected figure on the California racing scene for 50 years, Wednesday was announced as winner of the 2021 Jim Chapman Award for excellence in motorsports public relations.

The Chapman Award is considered by many in the industry as the highest honor in racing public relations. It is named in memory of Chapman, the legendary PR executive and innovator, who worked with Babe Ruth and was named Indy Car racing’s “most influential man” of the 1980s. Chapman died in October 1996 at age 80.

The announcement was made by Michael Knight, chairman of the selection committee, and one of Chapman’s closest friends. The award is determined by a vote of national media members and is authorized by the Chapman family. PR representatives from all forms of motorsports are eligible for consideration. Since COVID-19 led to different work restrictions in various series, making a 'level playing field' evaluation impossible, a sort of 'veterans committee' subset of the full panel nominated and voted for those either retired or active in a very limited way.

"I know Jim would be delighted because Owen works in the 'old school' manner  Mr. Chapman perfected during his iconic life and career," said Knight, the inaugural Chapman Award recipient in 1991 and now award rights-holder. "He'd also smile because both were newspaper reporters and editors, a business Jim revered.

“Jim set the ultimate standard of professionalism, class and dignity, which forever elevated PR and media relations. His word and handshake were his bond. He only did things one way: First class. Most importantly, he knew that solid professional relationships with journalists was important in good times and absolutely essential in bad times.

"Jim was a true ‘people person’ and knew nothing could replace a handshake, a face-to-face conversation, a shared meal, or the sound of another person’s voice.

"If still with us, I'm certain he'd speak out about the highly impersonal way PR is now done by too many, who think social media messages equal relationship-building. He'd point out an E-mail isn't 'personalized' by addressing it to 'all.' Jim not only knew journalists, he knew them as people, what was happening in their lives, so he could offer congratulations, sympathy or help."

The Chapman Award has three major purposes: 1. To honor Chapman's unmatched legacy; 2. To recognize current PR practitioners who work to Chapman's standard and in his spirit; 3. To provide learning and inspiration for newer and future PR representatives.

Kearns motorsports' PR career began in 1967 at the Bakersfield (Calif.) Speedway, while also writing a weekly racing column for the Bakersfield News Bulletin and the daily Bakersfield Californian. He went on to be a city-side reporter, editorial page editor and executive editor at the Californian before accepting a PR job with NASCAR in 1983.

Kearns handled PR and administrative duties for what was then called the Winston West Series (now ARCA Menards Series West) and the 20-plus weekly tracks in eight western states. He was the founding communications manager for both the NASCAR Northwest and Southwest late-model stock car tours. In 1994, he became the first communications manager for the then NASCAR Craftsman (now Camping World) Truck Series, tasked with national PR outreach and liaison with its tracks, TV and radio partners.

Kearns retired in 2014 but remains active as a West Coast Stock Car/Motorsports Hall of Fame Board member. He was inducted into that Hall in 2011.

Established in 1991 by media and publicists within the CART series, the Chapman Award originally focused on achievement in CART. After a hiatus of several years, the award was resumed in 2004, with eligibility expanded to anyone working in racing PR.

Chapman, who was born in Macon, Georgia, started as sports editor or managing editor of several Southern newspapers before joining the New York Times. He entered the PR business in 1946, as regional PR director for Ford Motor Co. in Detroit.

Soon thereafter, Chapman hired Ruth as ambassador for the automaker’s sponsorship of American Legion Junior Baseball. They traveled together for more than two years for personal appearances and became close friends. Chapman was at Ruth’s bedside when he died in August 1948 and then officially announced Ruth’s death to the press corps that had maintained an around-the-clock vigil at New York’s Memorial Hospital.

In 1950, Chapman left Ford to start his own PR firm. One of his first clients was Avis founder Warren Avis. Chapman devoted much of his time to financial PR, which he once called his “favorite form of PR,” and helped companies get recognition among analysts and even gain admission to the New York and American stock exchanges.

“Jim was one of the most innovative and imaginative PR men ever to grace a pit lane,” said Gurney, the American racing great who died in 2018.  “Jim practically invented most of what is now considered routine sponsor PR work. He was the first, as far as I know, who thought of putting up a sponsor hospitality tent alongside a racetrack (at the old Riverside International Raceway), filling it with extravagant race car ice-sculptures, beautiful food and beautiful people from the business, sports and movie industries. He started an ‘open house’ tradition in Ozzie’s hotel suite in Indianapolis, where journalists could rub shoulders with John Wayne or (astronaut) Scott Carpenter.”

Chapman’s greatest professional acclaim came from 1981-1992, as director of CART series sponsor PPG Industries’ program. Chapman was instrumental in raising PPG’s prize fund from $250,000 to more than $3.75 million at the time of his retirement in February 1993. The all-female PPG Pace Car Driving Team was another Chapman innovation, as were the PPG Editors’ Days, when he brought business and feature writers to the tracks for lunch, pace car rides, and driver interviews.

In 1982, Chapman negotiated a landmark sponsorship for PPG with then- Indianapolis Motor Speedway President Joe Cloutier, which formally made the Indy 500 a points-paying event in the PPG Indy Car World Series, an arrangement that continued through the 1995 season. “That was one of the most satisfying moments of my career,” Chapman recalled. “Roger Penske, among others, told me it was the best thing that had ever happened to CART.” In addition to a major contribution to the prize fund, PPG later became sponsor of the $100,000 Indy 500 pole award, and paid a special winner’s bonus in the early years of NASCAR’s Brickyard 400.

In its obituary, the New York Times wrote that Chapman "served as a father confessor to many top racing drivers." Two-time Indy 500 winner and PPG Cup champion Al Unser Jr. said on behalf of his fellow drivers, "With Jim, when he says ‘jump,’ we just ask ‘how high? And we do it right then.”

Chapman's professional achievements earned him vast recognition.  The mayors of Detroit and Long Beach, Calif., presented him proclamations and the key to each city.  In 1993, Indiana Gov. Evan Bayh named him Sagamore of the Wabash, the state's highest honor. He served as president and/or director of more than 30 Michigan and Detroit-area civic and charitable organizations.  Chapman became active in the civil rights movement in the 1950s and represented the Detroit Urban League and United Negro College Fund in several controversial situations.  He admitted to shedding "buckets of tears of joy" when Willy T. Ribbs became the first African-American driver to qualify for the Indy 500 in 1991.

The permanent Jim Chapman Award is cast in bronze and features a classic photo of Jim wearing his favorite navy blue double-breasted blazer and the names of all the award recipients. The text under Jim’s photo reads:

“James P. Chapman (1916-1996). A great man who deeply cared about country and church; family and friends. A legend in the public relations industry who set the ultimate standard of professionalism and excellence. A superstar who superstars like Babe Ruth wanted at their side. A pioneer in motorsports PR who practically invented most of what is now considered routine. A true 'People Person' who knew a mutually-respectful relationship with journalists was important in good times and essential in bad times. A mentor kind enough to help others achieve success. A gentleman who understood nothing could replace the sound of the human voice, a handshake, a face-to-face meeting, a shared meal, a hand-written note of thanks.

“All who ever have, do, or will work in public relations stand on Mr. Chapman's shoulders.