The 100th running of the Indianapolis 500 will be this May.

But, today, I remember another "100" and one which has a strong connection to the Indianapolis Motor Speedway and the IndyCar series.

PR legend and my closest friend, Mr. James P. Chapman, was born on January 24, 1916 in Macon, Ga. This Dan Boyd photo, taken at the 1991 CART awards banquet, is very special to me. A print, with personal inscription from Jim, occupies a place of honor in my office. 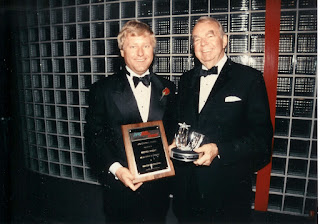 The Chapman Centennial is so important to remember because there was no finer gentleman and no greater practitioner of the PR profession. The level of respect Jim earned was such that everyone would take or return his call. He could walk into a newsroom and not only know everyone's name, he knew the names of spouse and children. As director of PPG's sponsorship of the CART series, he worked behind the scenes to quietly resolve serious issues between CART and some of its event organizers and sponsors.

As Dan Gurney once said, Jim practically invented most of what is now considered routine PR work.

Jim was close to the Hulman-George family and every May hosted a dinner for IMS department heads and spouse. Mari Hulman George and Tony George attended Jim's 1996 memorial service in Michigan. Ask anyone who knew Jim and they would tell you this: He was probably the only one who could have negotiated a settlement between Tony and CART. I believe that to be true in my mind and heart. But his health did not permit Mr. Chapman to be active at that time.

In 1982, Chapman negotiated a landmark sponsorship for PPG with then- IMS President Joe Cloutier, which formally made the Indy 500 a points-paying event in the PPG Indy Car World Series, an arrangement that continued through the 1995 season. “That was one of the most satisfying moments of my career,” Chapman recalled. “Roger Penske, among others, told me it was the best thing that had ever happened to CART.” In addition to a major contribution to the prize fund, PPG later became sponsor of the $100,000 Indy 500 pole award, and paid a special winner’s bonus in the early years of NASCAR’s Brickyard 400.


“With Jim, when he says ‘jump,’ we just ask ‘how high?,” Indy 500 winner and PPG Cup champion Al Unser Jr. said on behalf of his fellow drivers. “And we do it right then.”

Any PR person would cherish the opportunity to work with Babe Ruth, Gurney, Bill France Sr., Andretti or Avis Rent-a-Car founder Warren Avis. Jim worked with all of them. Correction: They all wanted to work with him.

The most important thing I think of on the occasion of the Chapman Centennial is relationship building. Jim instinctively knew that having solid one-on-one relationships with key journalists was helpful in good times and absolutely essential in troubled times. There was no Internet, or E-mail, or texts, or Twitter or any other modern-day gizmos in his era. He built those relationships with phone calls, hand-written notes, a handshake, a smile and a "Thank you," often over a shared meal.

Today, far too many PRers think such relationships are accomplished with an impersonal electronic message. Jim knew nothing could ever replace the sound of a person's voice, a smile, a look in the eye, a handshake. Forever it will be so. I am absolutely certain Jim would speak out against this lack of professionalism and would not be able to understand that a lot of publicists these days don't even bother to visit the media center to talk with journalists and make new media friends. You'd be amazed that some of the most famous teams with big-time sponsors employ such people. Shame on the team owners and sponsorship managers and all others who allow this to happen.

In the nearly three decades I worked in PR somehow, without E-mail etc., I and others knew when a reporter was ill, or had to have surgery, or had a sick spouse or children, or who had a death in the family, or moved into a new home, or other significant life happenings. We knew because we were actually outreaching and talking to people. And, as a function of courtesy and good PR, I and others would send flowers or make some other appropriate gesture. It's pathetic many in today's PR crowd reflect the declining standards in our society and don't even know enough to send a card.

How important was Chapman? One measure: The New York Times published a staff-written obit.

The Jim Chapman Award for Excellence in Motorsports Public Relations is decided by a blue-ribbon media committee, as Jim wished. I am the legal rights-holder of the award and non-voting chairman of the committee. As I always say to JCA recipients: The true honor is not the plaque. The true honor is having your name forever associated with that of the great James P. Chapman.

Posted by Michael Knight at 6:53 PM