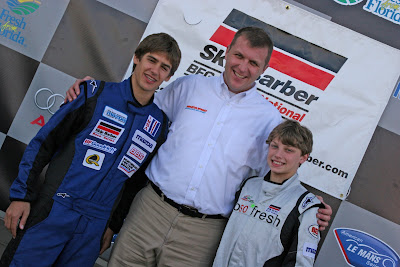 Mazda's John Doonan is surrounded by karting kids Court Vernon (left) and Sage Karam, who have advanced to the BFGoodrich Skip Barber Nationals presented by Mazda.

"On any given weekend, there are more Mazdas on the road-race tracks of America than any other brand of vehicle."

As Gordon Kirby and others have written, Mazda is the No. 1 advocate and supporter of road racing driver development in the U.S. It is a very comprehensive program.

Going back to Atlantics and the old Bosch Super Vee series, I've always been a strong believer in robust driver development efforts. One side effect of the economic downturn we've seen, at least in Sprint Cup, is owners and sponsors trending toward veteran drivers who are known quantities -- they can qualify, and race consistently, if not spectacularly.

I wanted to know more about Mazda's very different philosophy. So, before he spoke at the recent AARWBA Shav Glick Newsmakers Forum, I asked John Doonan. He's Mazda's manager of motorsports team development.

"The program has always been built around grass-roots racing. Our competition parts program, coupled with all of the corporate partners we have, have allowed us to do what we do. The other piece of it is, Mazda has the youngest average age buyer in the industry. The ability to have our brand in front of young minds, and their parents, frankly, because we're involved in karting, allows us to identify our next generation of customer. We want to continue that. For us, it's not necessarily about everything that happens at the racetrack, but also, what happens at the dealerships. That whole ladder system, as it developed, as our partnership with Skip Barber came together, we noticed the missing piece was karting. You don't get any more grass-roots than karting. Now, on both sides of the open-and-closed wheel ladder, we've got everything covered."

I wondered if going with non-"star" names in our celebrity-driven, People magzine society, was a tough sell to management. Especially now.

"The whole philosophy we have is, we don't necessarily want to own the driver's name, we want to own their path. Someday, in the Indianapolis 500 winner's circle, Daytona 500, Le Mans, Sebring, have the driver say in their post-race interview, 'I wouldn't be here today if it wasn't for the opportunities I had to grow my career in Mazdas.' It's not necessarily the 'name' driver. The management is fully behind that concept."

An important new addition to the lineup, however, is Mazda's involvement with the respected Dyson Racing team in the ALMS LMP2 class. Is this a "star" turn?

"Dyson's vision is to build a ladder system within Dyson Racing. But as a family-oriented, independent team, who has never necessarily been a factory-endorsed team, it's an opportunity for us to get our program out more visually. We're going to test some of our ladder guys in their car during the Le Mans break."

Anyone with any interest in the future of American road racing should keep an eye on what Mazda is doing. And, say thank you.
********************************************************************
Mike Harris has made it official: He'll retire from the Associated Press July 1. Mike, the AP's national motorsports writer since 1980 (when I first met him), began to formally tell people last weekend at Daytona. I'll have much more on Mike's enormous contributions to racing in the upcoming months.
********************************************************************
I'll be guesting on Racing Roundup Arizona next Monday, Feb. 16. The show airs from 7-9 p.m. (local time) and can be heard on 1310 KXAM or at http://RacingRoundup.com .
********************************************************************
FAST LINES: One of the most stunning things I've ever seen has been the near zeroing-out of staff-produced NASCAR coverage among a lot of Southern newspapers . . . Count me among those sorry to see John Daly end his The Daly Planet reporting/analysis/
conversation about NASCAR TV coverage . . . I wish broadcasters, writers and publicists would embrace the fact that event "records" aren't valid "records" when the format changes. The Budweiser Shootout was a great example. Lead changes and other stats from this year's event mean nothing when placed in contrast with previous runnings contested to different distances . . . According to a story in the Arizona Republic, an expert on how to do a job search in these tough times recommends making cold calls. Why? It helps you "stand out from the rest." Sounds like what I've been saying about PR people who actually take the time to reach out to individual journalists . . . Latest example of the decline in journalistic standards: Katie Couric's pre-Grammys special last week, in which she mainstreamed behavior that should be considered on the extreme fringe of our culture. Yes, the ANCHOR of the CBS Evening News mouthed what was essentially an infomercial . . . Congratulations to Paul Page, who recently was presented the Eddie Sachs Lifetime Achievement Award by the Michigan Auto Racing Fan Club. Eddie Sachs Jr. made the presentation . . . Sanctioning body and track publicists, take note: The number of media credentials issued for the Super Bowl was down, the NFL admitted. The reason? The economy and cost cutting, of course. The Atlanta Journal-Constitution sent no one. Now's the time to be cultivating and appreciating -- not haranguing -- those who are still out there providing coverage. Especially those who go out-of-their-way to provide quality coverage . . . Politico.com posted a column recently that offered this observation: "Smart campaigns know that it’s a waste of time to attack and ban the media. Seducing the media is much more productive."
********************************************************************
Mediabistro.com (which I check out daily) recently posted a Q&A with Howard Bragman, CEO of Fifteeen Minutes Public Relations. I can't honestly say I agree with everything Bragman said in his interview, but here are a selection of right-on-point remarks:

" . . . we all have images -- whether we think we do or not. You don't have to be Angelina Jolie to have an image. You've got a Facebook page, or you're the president of the PTA, you're trying to clean up a river or run a dry cleaners; we all have something that we want to get out there. If you don't define yourself to the world, somebody else is going to define you -- and you're probably not going to like it as much as if you did it yourself."

"The metabolism of the media has gone berserk, meaning the speed at which things happen. You used to have time to take a breath, see what was going on, get the big picture. Now you barely have time to do that -- then the video's on TV. They're digging this hole for you so quickly. I've never seen reputations shattered so quickly in this world. Did you see how stunningly quick the governor of New York went down? A very powerful man -- did you see how quickly that happened?"

"The media can screw up very quickly because it seems to me many media outlets are more interested in speed than they are in accuracy. I like journalistic standards. I'd rather take a breath and get the story right rather than get it out quickly. This is the way the world is now. I can't bury my head in the sand. And the Internet has great value because, trust me, there ain't a lot of print space left, you know? When you've got to get publicity for a client, and they're paying you because they want to get their image out there, you don't have the same opportunities you did 10 years ago."

"There's a lot of PR people . . . who seem to be proud that they're inaccessible. You can't talk to them and they don't return E-mails, and I'm sort of proud of the opposite. If a journalist approaches me, even if it's a 'Sorry, we're going to pass on that,' they'll generally get a communication from me."

"We used to talk about crisis control. Now it's crisis management. You can't control the blogosphere and the Internet. I could maybe corral it. I could maybe get it to flow into the ocean like lava to a place where it's not going to do too much damage. But I can't stop it. There's ways to bury it once it's out there. There's tricks of the trade, but it's a different world."

"PR no longer stands for public relations. It stands for perception and reality. And the job of the PR person is always, always, always to manage the relationship between perception and reality. The concept is like the scales of justice, and you've got perception on one side and reality on the other -- you want them in balance. Because if perception exceeds reality, we call that hype -- or Dr. Phil. And that means the wind's going to come under your balloon and the balloon's going to pop. As I always say, you want a career made in a crock pot, not a microwave."